The Jedox In-Memory DB offers the ability to define holds on cube cells. When a hold is defined, the value in the cell is fixed and will not be affected by write-back operations. However, values can still be splashed on cells above a held cell in the hierarchy; in that case, the value changes are applied only to sibling elements of the held element. Holds obtain a continuous ID number after their chronological creation. Every user attempting write-back is affected by holds, and they carry over across sessions in the server. Multiple holds can be set on the same cell. Holds can be set from reports in both Jedox Web and Excel.

Once defined, holds do not react to changes in dimension hierarchy. If the child element of an element that was held is moved into a different branch of a dimension hierarchy, that element will still be held. The hold on the consolidated element has to be reset (removed and set again) in this scenario. Similarly, if an element is added as a child to a held, consolidated element, it will at first not be held.

If an element that was explicitly held is deleted, the hold is removed. If the element was only part of a hold with multiple other elements from the same dimension, the hold is kept; only the deleted element is removed in this case.

Holds are also accessible from Jedox Integrator via Groovy scripting.

Using the Hold command to create a hold

For this example, create the following view: 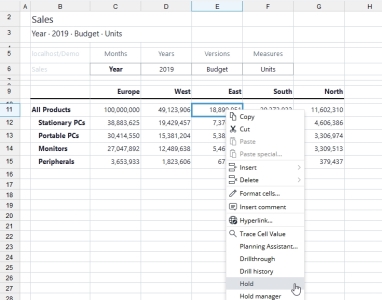 To display the holds that affect a PALO.DATA* cell, open the Hold Manager for that cell. For example, in the example above

Splashing another value in cell E11 will result in an error message:

To delete holds, select them in the Hold Manager and click Release.