You can revert or undo planning actions, including splashing, with the Jedox In-Memory DB Server in both Jedox Excel Add-in and Jedox Web, but this functionality requires a bit of foresight. You cannot spontaneously undo a series of actions; you must first set a reference for undo. This explicitly defines an area of the cube where data will be entered, also known as setting an undo lock. From the moment such an area is defined on a cube, other users will not be able to enter data in that cube area; however, they will be able to read data (including the user's current changes). OLAP Server maintains an explicit history of undo locks you make and allows you to undo the last action(s) step by step, revert all write-back actions since setting the undo lock or commit the changes. The lock is unset and other users are able to enter data in the cube area again only after you either revert or commit.

To be able to set a reference for undo, you must have write access on the cube. Committing or reverting (in other words: releasing) active undo locks is only possible for the user who defined the undo lock, or for the “admin” user or another user with “D” access on the “system operations” role rights object.

Setting a reference for undo

After setting a reference for undo, the other three options are now active:

In Jedox Web, you can use Enable undo both in Reports (for unlocked cells) and in Designer. In Reports, however, even if you can select multiple cells at the same time, the reference is set only on the first cell that you select. It is recommended that you set references on cells individually.

You can view the current undo locks for a given cube in the Modeler. Open the cube's properties page, and click on the Undo Locks section: 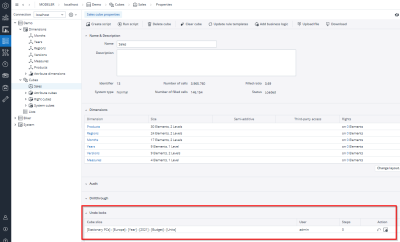 Each entry shows the cube slice that was defined for the lock, the name of the user who created the lock, and the number of writeback actions executed since the lock was created. Additionally, you can either revert or commit changes here, thus releasing the lock.

The list of undo locks is also available within a report by right-clicking on an applicable area in the report:

The resulting dialog also allows you to pick up a lock that was created in a previous session and undo single write-back steps from that previous session. Picking up a lock is possible regardless of whether the lock was defined in Jedox Web or Jedox Excel Add-in.